This will be a post that's updated as I learn to implement Partytown, which honestly doesn't seem straightforward - at all.

I've been deep diving into web performance during the last year and tried to implement my findings on my current customer, with good results. The last (?) major issue is third party scripts. The comprehensive list are as follows.

These scripts are currently the largest performance villain on the web application. To improve performance, the only options are to either remove the scripts - which will not happen - or to try Partytown.

My understanding of Partytown is that it somehow runs third party scripts separate from the main thread, and that this method should offload the web application in a way that performance metrics are (greatly) improved.

I will therefore try to implement Partytown on the web application of my current customer. It so happens that this web app does not use any frontend framework like React, Vue or Solid. It's a .NET Core 6 web application with HTML, JS and CSS - no fuzz. It's thus clear that I should follow the HTML guide. I use Webpack as a bundler.

These are the metrics before using Partytown. 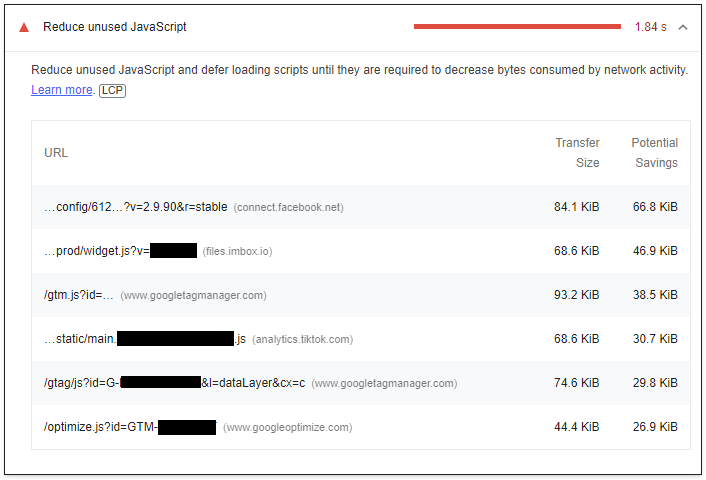 Once you've installed the NPM library, it seems we should inline configuration and a snippet in the <head> section. Partytown has a Webpack utility script that's used to include the Partytown files in your build folder, and thus also include references to the files in the manifest file - if you have one.

__PUBLIC_PATH__ is set to my build folder path in DefinePlugin.

I include partytownConfig.js in Webpack as its own entry point.

runtime: false sets this entry point to not depend on the Webpack runtime. This is handy if you want to inline a script directly in your DOM (where you might not yet have a Webpack context).

The following is added to the <head> tag - probably as high as possible. @WebAssets.GetContent("...") is a function that (1) reads the manifest and (2) fetches the content of a file.

In essence, these are the steps the docs mention - so let's try it! I'm wrapping all 3rd party initialization scripts in text/partytown script types. These scripts are generally just a short stub that lazy loads larger scripts.

Regarding Partytown, the following is loaded according to Devtools Network tab.

There are in total 313 requests to proxytown.

I also get this warning, but I have no clue what it's about.

However, looking at the 3rd party scripts, only a few scripts successfully loads.

The common issue (except Imbox) for the failed scripts is CORS:

At this point, I have only added text/partytown to the initializing script. For Facebook, this means I've only wrapped the snippet mentioned here but not any subsequent use of fbq.track(...). It would be reasonable to only wrap the initialization snippets, because it's a this point the main thread would be most congested.

Out of the 3rd party scripts mentioned in this blog post, only Facebook Pixel requires a reverse proxy according to Partytown. However, according to the tests - only Google Tag Manager and Google Optimize seems to work without a reverse proxy, due to CORS issues.

I'm not sure if there's another solution to the CORS issues other than a reverse proxy.

In order to not run into CORS issues, it seems Partytown suggest to use a reverse proxy on your own domain. In .NET Core you can use YARP to simply forward requests to a remote endpoint.

Last step is to add the reverse proxy to the Partytown config.

Let's begin with checking if scripts can be loaded through the reverse proxy.

Now only Pinterest fails to load. Looking at metrics, they are improved but maybe not as much as I expected.